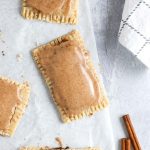 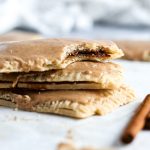 These vegan cinnamon pop tarts are gluten-free and so easy to make. They have a flaky gluten-free crust, brown sugar cinnamon filling, and delicious cinnamon frosting. "Are pop tarts vegan?" is a common question, but with this recipe, you don't have to guess. These are completely gluten-free and vegan pop tarts made from scratch with wholesome ingredients and no artificial flavors. Better than the real deal!

Brown sugar cinnamon pop tarts were one of my favorite flavors as a kid. Having pop tarts for breakfast is a childhood memory I think many people have! And who says you can't have pop tarts as an adult? I bet you will love these gluten-free vegan pop tarts more than the "real ones" from the store.

If you're looking for another delicious cinnamon breakfast option, add these cinnamon roll donuts to your list! You won't regret making either recipe.

Why You'll Love This Recipe

Here are some important notes on a few of the ingredients, including tips for making substitutions if you need them:

Make sure to properly measure your flour. I recommend weighing your flour on a kitchen scale to ensure you are not overmeasuring your flour. When you scoop flour out of the bag with a measuring cup, you will measure too much flour because it packs down in the cup. Not measuring flour properly can create pastry dough that is too dry and crumbly to roll. Be careful of this!

Make sure you let the dough rest. Gluten-free flour needs time to absorb the liquid properly, so remember to let your dough chill in the fridge for at least 30 minutes. This allows it to properly absorb the moisture and makes it easier to work with.

Here are step by step instructions and helpful tips for making the pop tart dough:

STEP 1: Stir dry ingredients. In a large bowl, stir together the gluten-free flour, coconut sugar, and salt until combined.

STEP 2: Mix in coconut oil. Use a pastry cutter to mix in the solid coconut oil. Keep mixing until you get a clumpy, sandy mixture, like big breadcrumbs. You should still have some pea-sized coconut oil chunks, this is good.

STEP 3: Add plant milk. Make sure to use cold plant milk straight from the fridge. Use a pastry cutter to mix until a thick dough begins to form. Be careful not to overmix or it will become tough. The dough should be thick and maybe a bit sticky.

STEP 4: Chill the dough. Divide the dough into two balls and flatten them into disc shapes. Wrap each disc in plastic wrap and place them in the fridge to chill for 15-30 minutes. Chilling is important for allowing the flour to absorb moisture properly.

STEP 5: Roll out the dough one disc at a time. The easiest way to roll the dough is between two pieces of parchment paper to prevent sticking. If you don't have parchment paper, roll it on a lightly floured surface. Use a rolling pin to roll the pop tart dough into a large rectangular shape.

NOTE: The pop tart dough may seem crumbly at first. Remember that gluten-free dough does not behave like traditional dough and may feel dryer or more crumbly than what you are used to. This is okay and normal! Roll the dough as best you can. Using parchment paper between your rolling pin and the dough makes it easier and prevents the dough from sticking to your rolling pin. And remember, you can always patch the dough if it does stick or tear.

STEP 6: Cut the dough into rectangles. Use a knife or a rectangular cookie cutter to cut the dough into 8 evenly-sized rectangles. Place them on a baking sheet lined with parchment paper. Then roll out the second disc of dough and cut it into 8 rectangles as well. Set them aside while you make the brown sugar cinnamon filling.

The filling for the cinnamon pop tarts only takes a minute to mix up.

STEP 1: Combine all ingredients in a bowl. Stir the coconut sugar, cinnamon, flour, and coconut oil until well combined. It should have the texture of wet sand.

STEP 2: Add filling to pop tarts. Use a spoon to add the brown sugar cinnamon filling into the middle of the rectangles of dough. Be sure to leave a border of dough around the edges for crimping later. You only need to add filling to the 8 rectangles on the baking pan, not all the rectangles.

STEP 3: Place dough on top. Next, take the rectangles of dough without filling and place them on top of the ones with filling. Use a fork to crimp all the way around the edges, molding the pop tarts together. Use a toothpick to poke a few holes in the tops to allow for airflow while baking and brush some plant milk over top to encourage light browning in the oven.

TIP: If the dough cracks, don't panic. Gluten-free pastry dough is prone to cracking more than wheat flour doughs, but it is easy to fix! You can patch the holes with excess dough, or brush plant milk over the cracked areas and use your fingers to mold any tears back together.

STEP 4: Bake the vegan pop tarts. They should bake for 12-15 minutes at 400 degrees Fahrenheit. They may turn slightly golden brown around the edges and corners. Allow them to cool before frosting them.

You can make frosting for the vegan cinnamon pop tarts with just 4 simple ingredients. Here are instructions for frosting the pop tarts:

STEP 1: Mix frosting ingredients. In a small or medium bowl, stir together the vegan powdered sugar, cinnamon, vanilla, and plant milk until creamy and smooth. It should be thin enough to spread, but not super runny.

TIP: You can adjust the frosting consistency. If the frosting is too thin and runny, add more powdered sugar until it becomes thicker. If it is too thick and is hard to spread over the pop tarts, add more plant milk one teaspoon at a time.

STEP 2: Frost the pop tarts. Use a spoon to drizzle the cinnamon frosting over the pop tarts once they are cooled. You can use the back of the spoon to spread it around the pop tart, creating an even layer of frosting.

These cinnamon pop tarts are incredibly delicious, but you can make other pop tart flavors with this recipe with a few simple changes.

If you love adding fruit to your breakfast (and pop tarts), you might love this almond butter and chia jam toast or these protein overnight oats, too.

No. Pop tarts are not vegan because they contain gelatin in the frosting, and many pop tart flavors have milk as an ingredient. These homemade cinnamon pop tarts are a great vegan pop tart alternative.

What kind of dough are pop tarts made of?

Can you get vegan pop tarts?

Pop tarts with frosting are not vegan, but there are other companies that have created vegan pop tarts, like Bobo's Toaster Pastries. You can easily make vegan pop tarts at home using this recipe.

Which pop tarts are vegan?

Unfrosted strawberry, unfrosted blueberry, and unfrosted cinnamon pop tarts may not contain gelatin, but it's hard to say if they are really vegan due to the sugar used in them being processed with bone char.

Store the pop tarts in an airtight container at room temperature for 3-5 days. Consider heating them in the microwave for a few seconds to enjoy a warm pop tart for breakfast.

To freeze the pop tarts, place them in an airtight container with parchment paper between each layer. They can keep in the freezer for 2-3 months. Be sure to let them thaw for an hour or two before enjoying again.

If you made these vegan cinnamon pop tarts, I would appreciate it if you would leave a rating and review below. If you post a photo on Instagram and tag me, I will happily share it. For more recipe inspiration, follow me on Pinterest and join my email list to stay updated with new recipes and exclusive content each week. 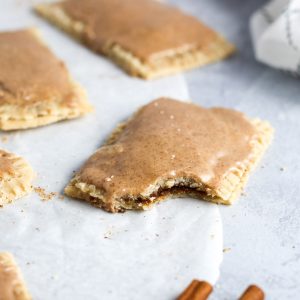 Store the pop tarts in an airtight container on the counter for 3-5 days. To freeze the pop tarts, place them in an airtight container with parchment paper between each layer. Keep in the freezer for up to 90 days. Having trouble with the pop tart dough? Please read the blog post for lots of helpful tips for making gluten-free pastry dough properly.
Share on Facebook Share by Email Pin Recipe
« Raspberry White Chocolate Bundt Cake
Oat Milk Hot Cocoa »