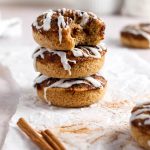 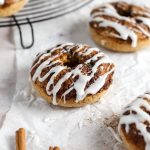 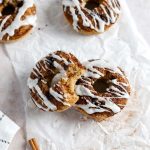 These cinnamon roll donuts are baked with a cinnamon-sugar topping and finished with a vanilla glaze. They are absolutely delicious and so easy to make! They taste just like cinnamon rolls and they have such a soft, moist texture. These make for the perfect holiday breakfast or dessert.

I love making these cinnamon roll donuts for breakfast on Christmas morning. I promise your family is sure to love these! They're also great for Thanksgiving with the cozy cinnamon spice flavor. You can't go wrong with these donuts no matter what time of year it is.

These donuts use simple ingredients that you probably already have at home. It doesn't take long to mix up the batter and have the donuts in the oven. They will make your house smell incredible as they bake!

for the cinnamon sugar topping

If any of these ingredients are unsuitable for you, please see the section on substitutions to know how to change them appropriately. I don't want you to miss out on these delicious donuts!

Like I said before... these cinnamon roll donuts are super easy to make! It will only take you 10 minutes. Maybe not even that long!

STEP 1: Preheat oven to 350F. Grease a standard donut pan with non-stick cooking spray, then set aside for later.

STEP 3: Whisk wet ingredients. In a separate bowl, whisk together the egg, almond milk, greek yogurt, and vanilla extract until well-incorporated and smooth.

STEP 4: Add wet to dry. Add the wet ingredients to the dry ingredients and stir gently until combined. Be careful not to overmix or your donuts won't be as soft!

STEP 5: Add batter to pan. Use a spoon to transfer the donut batter into the donut pan. You may also use a piping bag with a large tip if it's easier.

TIP: Gently shake the donut pan side-to-side to level the batter in the pan. This will ensure your donuts have smooth tops when they bake, with no awkward bumps.

STEP 6: Make cinnamon topping. In a small bowl, melt the butter and stir in the cinnamon, coconut sugar, and almond milk until you have a smooth mixture.

STEP 7: Add topping and bake. Use a spoon to drizzle the cinnamon-sugar topping over the unbaked donuts. Use the back of the spoon to spread it evenly around each donut. Then, bake the donuts for 15-18 minutes or until golden brown.

TIP: Let the donuts cool completely before adding the glaze, or else it will melt and turn into a drippy mess!

You don't need any fancy frosting skills for these donuts. All you need is a spoon to add the glaze. Super simple and so easy. Even the most beginner bakers can make these cinnamon roll donuts look beautiful!

To make the glaze, add the powdered sugar to a bowl with a sprinkle of salt. Stir in the almond milk one teaspoon at a time until the desired consistency is reached. It should be thick enough to drizzle off the spoon, but not too runny, or else it will flow right off the donuts!

To glaze the donuts, place parchment paper under the donuts and then use a spoon to drizzle the glaze over the donuts. Go in a back-and-forth motion to create pretty "stripes" on the donuts, or you can smear the frosting over top to create a thicker glaze that will resemble cinnamon rolls.

The ingredients in these donuts are pretty simple, but I've provided some guidance in case you need to make substitutions for dietary restrictions or preferences.

If you need to make substitutions, please don't try and change more than one ingredient in the recipe at one time. I can't guarantee the donuts will work out this way, and I'd hate to see you waste ingredients! Follow the recipe as closely as possible to get the best results.

Not only are these cinnamon roll donuts completely delicious as is, but there are other flavor variations you can try to make them even better!

For another delicious cinnamon-flavored recipe, you have to try this vegan apple cake!

Store the donuts in an airtight container on the counter for 5-7 days. This will keep them from drying out. If you have to stack the donuts in the container, place parchment paper between each layer to prevent them from sticking.

To freeze the donuts, place them in an airtight container in the freezer to keep for 30-60 days. Be sure to let the donuts thaw on the counter for 1-2 hours before enjoying again.

If you made this recipe, please consider leaving a rating and review below. I would love to know how you liked the donuts! Post a photo on Instagram and tag me so I can see how delicious they look. For more baking ideas, check out these recipes:

Samantha Ensinger
These cinnamon roll donuts are baked with a cinnamon-sugar topping and finished with a vanilla glaze. They are absolutely delicious and so easy to make! They taste just like cinnamon rolls and they have such a soft, moist texture. Perfect for holiday baking!
5 from 6 votes
Print Recipe Pin Recipe
Prep Time 15 mins
Cook Time 15 mins
Total Time 30 mins
Course Dessert
Cuisine American
Servings 6 donuts
Calories 341 kcal