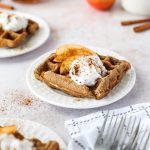 These cinnamon apple waffles are made with real apples, unsweetened applesauce, and whole wheat flour to make them super healthy and delicious! Packed with lots of fiber, protein, and Omega3s, these waffles are not only perfect for fall mornings, but they're great for your body too!

These waffles aren't too sweet, so I love topping them with coconut whipped cream, maple syrup, and fresh apple slices to bring out the vibrant fall flavors. I've made these time and time again and they always hit the spot!

You can make these apple waffles vegan, or if you want another fall baking idea, this vegan pumpkin banana bread is a fan-favorite, too.

What I love most about these apple cinnamon waffles is how healthy they are! Each waffle packs 7g fiber, 6g protein, and only 3g of natural sugar. They will keep you full for a long time and provide your body with plenty of nutrients to fuel your day.

How to Make Apple Cinnamon Waffles

You can whip up these cinnamon apple waffles in less than 15 minutes. They are so easy to make and great for busy mornings!

STEP 2: Chop apple. Wash a large apple of your choice and cut it into small chunks about the size of a dime. These will be cooked into the waffle so be careful not to make them too big.

STEP 3: Whisk wet ingredients. In a large bowl, whisk together the egg, applesauce, and vanilla. Then add in the almond milk and stir to combine.

STEP 4: Add the dry ingredients to the wet ingredients. Fold the mixtures together until about half of the flour has combined. Then, fold in the chopped apple. Stir until the remaining flour has been incorporated.

TIP: Don't overmix your batter. It's okay if you still see small specks of flour in the batter. If you mix too aggressively or for too long, the waffles could become tough.

STEP 5: Heat your waffle iron. Be sure to spray it with a non-stick cooking spray. Add about ½ cup batter (depending on your specific equipment) per waffle and cook for about 3 minutes, or until steam stops coming from your waffle maker.

TIP: Quickly use a spoon to smooth the batter into the edges of the waffle iron to have nicely shaped waffles. Do this fast, before your waffle starts to cook through!

STEP 6: Repeat the process until all your batter has been used. In my waffle iron, the batter made 6 square waffles. Top your waffles with coconut whipped cream, fresh apple slices, extra cinnamon, and pure maple syrup.

TIP: You could also top your waffles with your favorite nuts. I like using pecans or walnuts for fall bakes!

These apple waffles can easily be made vegan with a simple change!

I truly believe these waffles taste just as good if you make them vegan! I guarantee your friends, family, and kids would never be able to tell you made any substitutions.

Variations to the Waffles

These healthy waffles aren't very sweet. That's one of the things I love about them because you have the ability to make them sweeter with toppings or enjoy them as is. If you prefer a sweeter waffle or are serving to picky kids, you can make a few adjustments.

All waffle irons are a little bit different. Depending on what type of waffle maker you have, you might have to adjust the cooking time by a minute or so. One way to easily tell when your waffles are done cooking is to notice the amount of steam coming from the waffle maker. When you first add the batter, you will notice a lot of steam. As the waffle cooks, it becomes less and less. When there is little or no steam left, the waffle is typically ready to come out.

In my waffle maker, I was able to get 6 square waffles from this recipe. However, your waffle maker might be different, so the serving amount may vary depending on what equipment you use.

TIP: You can double the batch if you want to ensure you have plenty of waffles to serve to your family, kids, or friends.

Fall is the best time for baking! For more delicious recipes, try these: 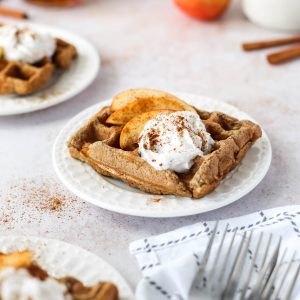