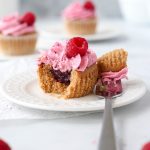 These cupcakes are perfect for Valentine's Day and spring and summer events. They have the flavor of raspberry lemonade cupcakes with the best combination of sweet and tart fruit flavors.

If you love these cupcakes, you'll also love these gluten-free and dairy-free strawberry filled cupcakes, which are also perfect for Valentine's Day.

Why You'll Love These Cupcakes

The ingredients in these cupcakes are pretty simple, which makes them easy to make. Chances are you have lots of these ingredients at home already!

Here are some important notes on a few of the ingredients:

Here are step-by-step instructions on how to make the cupcakes:

STEP 4: Add dry ingredients. Add the flours, baking powder, flaxseed, and salt to the bowl and mix until just combined. Scrape down the sides as necessary, but don't overmix.

Here are step-by-step instructions for making the buttercream frosting:

STEP 1: Beat the vegan butter. Mix the softened vegan butter on medium-high speed for 2-3 minutes. You want it to be super fluffy!

STEP 2: Add vanilla, lemon juice, jam, and salt. Mix on medium speed until all ingredients are well-combined. Watch as the frosting becomes pink from the jam!

Filling And Frosting The Cupcakes

It only takes a few minutes to mix up the homemade raspberry jam filling, and it tastes so much better than store-bought jam. Make sure the cupcakes are completely cool before filling and frosting them. If you're in a rush, you can refrigerate the cupcakes to cool them more quickly.

TIP: Be careful not to poke the piping tip too deep into the cupcake. You don't want to go all the way to the bottom, or the jam will escape into the liner and out the bottom!

STEP 2: Add raspberry jam filling. Once all the cupcakes have been cored, use a spoon or piping bag to add the raspberry jam into each cupcake. Fill them until the jam is level with the top of the cupcake.

STEP 3: Frost the cupcakes. Transfer the buttercream frosting into a piping bag with a piping tip. I like using a star tip. Frost the cupcakes in a circular motion, starting from the edge of the cupcake and finishing in the center to create a beautiful frosted swirl. Garnish with a fresh raspberry for a nice touch!

NOTE: This recipe makes enough frosting to lightly frost the cupcakes, as shown in the images. For extravagant, high-top frosting, you will need to make a double batch of the buttercream, or you might run out!

If you prefer, you may spread the frosting on the cupcakes with a knife for an easier option and more casual look. You may not use all of the frosting if you do it this way.

How do I make vegan raspberry frosting?

These cupcakes are topped with vegan raspberry buttercream. Use vegan butter or softened coconut oil for the frosting instead of real butter to make it vegan.

Does the vegan butter have to be softened?

Yes! You cannot use frozen butter for this recipe because it will not cream together with the sugars. Set the butter out on the counter 1-2 hours before baking so it is soft enough to use.

Are these eggless lemon cupcakes?

Yes, these are vegan lemon cupcakes, which means they do not have eggs.

Store the cupcakes in an airtight container in the fridge for 3-5 days.

I don't recommend freezing fully decorated cupcakes because the raspberry filling and buttercream frosting won't thaw well. You can freeze undecorated cupcakes in an airtight container in the freezer for up to 90 days. 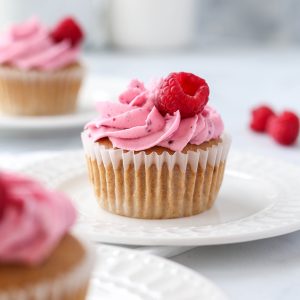 The lemon cupcakes themselves are not overly sweet. This is good. When paired with the jam filling and buttercream frosting, they have a sweeter, more decadent flavor. You can use any non-dairy milk for this recipe. I like almond milk, but soy milk, oat milk, cashew milk, or coconut milk are all acceptable. I prefer the unsweetened versions, since the frosting makes it plenty sweet.
Share on Facebook Share by Email Pin Recipe
« Mixed Berry Chia Seed Jam
Almond Butter & Chia Jam Toast »

Hi, I'm Samantha! I created Savor The Spoonful during my sophomore year of college with the goal of sharing dietary-friendly recipes that are truly delicious. I'm passionate about inspiring others to live a life without food rules and dieting. That means enjoying desserts like these, and having fun while doing so. Learn more about me.